Note: this cross-posted item is my contribution to our Banned Books Week recognition. We’ve been pitting books against each other, hoping to illustrate that there are always (at least) two sides to every story. Most of the other books were more social or political, but I liked this pair. 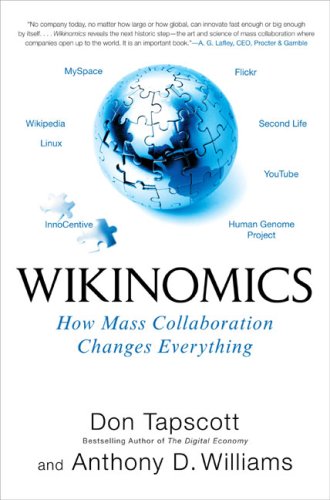 Wikinomics authors Don Tapscott and Anthony D. Williams tell stories of how the the internet’s unprecedented collaboration opportunities are changing the rules of economics. IBM, in one example, estimates the value of work done by volunteer software developers on Linux, the open source computer operating system built largely by people working for free, to be about one billion dollars, annually.

But Andrew Keen, in The Cult Of The Amateur : How Today’s Internet Is Killing Our Culture, worries that collaborative technologies like Wikipedia and YouTube are unfairly cutting into established economic models and destroying record companies, television networks, and other cultural institutions.

Both books praise technology, but differ on how it should be used and who should control it. Tapscott and Williams say IBM’s decision to embrace Linux and support open source software is saving the company $900 million/annually, while Keen argues that experts should be given more control over what is published online.